The Group’s capital adequacy is managed on the Bank level. It is aimed to ensure that the Bank's equity level is not lower than the one required by internal and external regulations. The regulations link the required capital level with the scale of operations and risks assumed by the Bank.

Considering the above, the Bank regularly:

In 2015 the solvency ratio, Tier 1 and internal solvency ratio of the Bank were above the required regulatory minimum. In order to ensure high standards of capital management, compliant with best banking practices, once a year the Bank reviews the applicable policies and procedures.

Capital adequancy of the Group 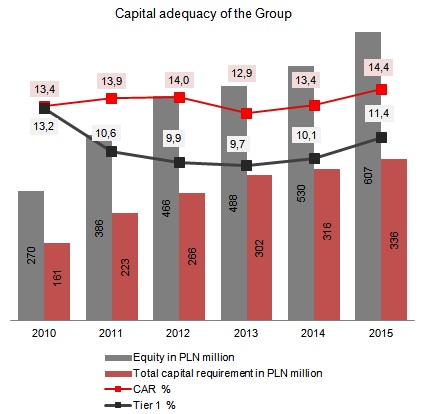 For the purpose of equity calculation, the Bank applies methods arising from Regulation of the European Parliament and of the Council (EU) no. 575/2013 of 26 June 2013 on prudential requirements for credit institutions and investment firms and amending the Regulation (EU) no. 648/2012 (CRR). The Group’s equity consists of Tier 1 (CET1) and Tier 2 capital.

In 2015, Tier 2 funds in the Bank included cash obtained from a subordinate loan received in 2014 from Poczta Polska S.A. and two issues of subordinate bonds (carried out in 2011 and 2012, respectively).

For the purpose of total capital requirement calculation, the Bank applies methods arising from CRR, in particular:

Since the trading scale was immaterial, the capital requirement regarding market risks for the Bank was PLN 0.00. This means that in the analyzed period the Bank’s capital requirement was limited to credit risk, operational risk, currency risk and risk of credit valuation adjustment. As at 31 December 2015 the adjustment amounted to PLN 51.0 thousand.

In 2015 the supervisory solvency ratio of the Group was above the required regulatory minimum.

When identifying key risks that occur in the Bank’s operations, having included the scale and complexity of a given operation, additional risks are considered which, according to the management, are not fully covered by Pillar 1 risks. The identification is to optimally adjust the structure of internal capital to the actual capital needs that reflect the true risk exposure level.

For the additional risk purpose, the internal capital is calculated based on internal methods accepted by the Management Board, which include the scale and specifics of the Bank’s operations in a given risk context.

Additionally, when determining the internal capital, the Bank applies a conservative approach with regard to risk diversification among each risk type.

Please note that due to the specifics of liquidity risk and in light of market standards and practices, the Bank does not determine an additional internal capital for this risk type. For this reason, special focus is placed on the process evaluation and management.

In 2015 the internal solvency ratio of the Group was above the required regulatory minimum.

Pursuant to the CRR and to the General Principles of Disclosing Information on Capital Adequacy in Bank Pocztowy S.A. accepted by the Supervisory Board of the Bank, in 2015 the Bank published information on its capital adequacy in a separate document.

The following tables present detailed calculation of base figures regarding regulatory capital and the solvency ratio as at 31 December 2015 and 31 December 2014.

* The adjustment regards elimination of a portion of the positive valuation due to unrealized gains in the transition period.

In 2015 the Bank’s activities ensured the maintaining of capital ratios on a save level, above the regulatory minimum.

The Bank informs to have been granted no financial support from public funds in 2015 under the Accounting Act of 29 September 1994 and in particular under the Act on granting the support for financial institutions by the State Treasury of 12 February 2009 (Journal of Laws of 2014 item 158).

Other risks Corporate governance: principles and scope of application