Key trends in the economy

Gross Domestic Product and its components

In 2015 the GDP growth was estimated by the Central Statistical Office at 3.6% versus 3.3% in 2014. In 2015 domestic demand remained the key driver of the Polish economy, with the consumption expenditure of the household growing by 3.1% and investments increasing by 6.1%. The consumption growth stemmed from the improved condition of the labor market and deflation reported in the entire year.  Interest rates announced by the National Bank of Poland were reduced in March 2015 by the Monetary Policy Council to record low levels, which has additionally improved the attractiveness of consumer loans. Despite low interest rates on loans, in 2015 investment growth was slightly slower than a year before, because the EU funds from the 2007-2013 Perspective had been used up and the financing from the 2014-2020 Perspective was not available yet which was accompanied by unstable environment and political changes in Poland. As a result of the Russian embargo on European agricultural and food produce, the growth rate of exports of goods and services decreased in 2015. Still, as the import growth rate was considerably lower, net exports contribution to the GDP growth was positive and amounted to 0.2 p.p. 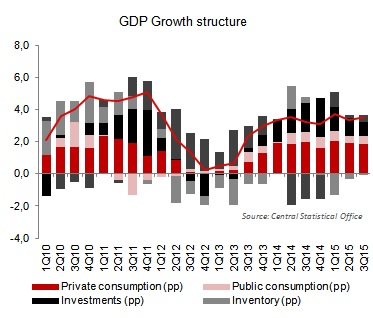 In 2015 the condition of the labor market was still improving. At year-end, the unemployment rate dropped from 11.5% at the end of 2014 to 9.8% and became a one-digit number for the first time since December 2008. Unemployment in Poland dropped thanks to stable economic growth and a growing demand for talents in the business sector. Moreover, weather conditions in the last three months of 2015 were more advantageous than the same time last two years, which also positively affected the unemployment rate.

In 2015, the growth in employment (unemployment reduction) was accompanied with an increase in salaries and wages in the business sector. Nominal annual growth of wages reached 3.5% as compared to 3.7% in 2014. Real wages growth rate was considerably higher thanks to deflation which was reported during the entire year. Real wages growth amounted to 4.5% in December 2015, as compared to 3.7% in December 2014.

In 2015 the consumer price index amounted to – 0.9%, which implies considerable deviation from the inflation target of the National Bank of Poland and a change since 2014, when it was equal to 0%. Last year saw deflation in all months of 2015 (YoY), with the highest ratio reported in February (1.6% YoY) and the lowest in December (-0.5% YoY). The key reason for a drop in prices in Poland were lower prices of commodities, including crude oil, on global markets. Crude oil prices dropped on the global markets in 2015 (BRENT by 35.9%, NYMEX by 30.5%) due to the considerable oversupply and unchanged production level in OPEC, hence fuel prices in Poland decreased significantly despite the weakening Polish zloty against the American dollar. The prices of food grew slightly only in the last three months of 2015 as a result of the summer drought, which adversely affected the production of fruit and vegetables. In 2015 core inflation (excluding food and electricity prices) amounted to 0.3% versus 0.6% in 2014, while in December 2015 the ratio dropped to 0.2% YoY. 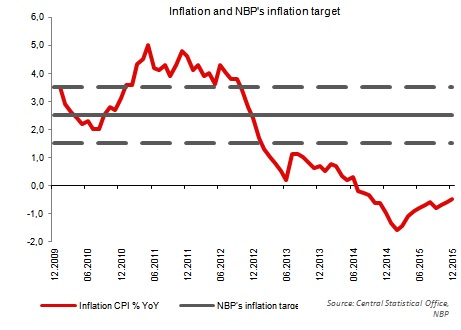 The year 2015 was a challenging period for the Polish public finance. The deflation, which proved longer and deeper than expected, affected VAT inflows, i.e. the key source of budget income, which were lower than projected by the Ministry of Finance. At the same time, the State budget spending was suspended, hence the budget deficit was lower than planned (apart from April and May). According to the data of the Ministry of Finance, at the end of November the budget deficit amounted to PLN 36,1 billion as compared to PLN 46,08 billion projected for 2015 by the coalition of the Citizens Platform and Polish People’s Party in the Budget Act. In the period in question the actual revenue amounted to 88.8%, while expenses to 87.4% of the planned level. In December 2015, after the parliamentary elections, the state budget was changed and the deficit was increased to PLN 49.98 billion, government revenue (both tax and non-tax) was reduced by PLN 10.5 billion (from PLN 297.2 billion to PLN 286.7 billion) and the total government expenses were reduced by PLN 6.6 billion (from PLN 343.3 billion to PLN 336.7 billion).

Although the actual budget revenue reported in 2015 differed from the projections of the Ministry of Finance since the very beginning of the year, thanks to advance funding of demand for debt in 2014 (32% at the end of December) and efficient funding of annual debt in Q1,2015 (57% at the end of March), the Ministry of Finance was able to introduce flexible management of the treasury bonds supply in the subsequent months, adjusting its structure to market conditions. Finally, debt demand funding was completed in October, when the advance funding of debt demand planned for 2016 was started. Limited supply of debt securities accompanied with an interest rate reduction implemented by the Monetary Policy Council contributed to a growing demand for Polish Treasury securities in Q1,2015. However, in the following months higher risk aversion on global markets, resulting from the political and economic crisis in Greece, slowdown in the Cheese economy and the expected increase in interest rates in the U.S. translated into higher profitability of Polish treasury bonds. Another factor was the insecurity of investors related to presidential and parliamentary elections. Finally, at the end of 2015 the yield on 2-year bonds reached 1.64% (versus 1.77% at the end of 2014), the yield on 5-year bonds amounted to 2.23% (versus 2.15% at the end of 2014) and the yield on 10-year bonds to 2.95% (versus 2.54% a year before). 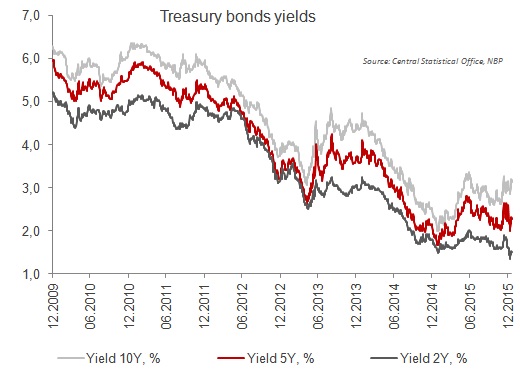 In 2015 exchange rates were fluctuating considerably mainly due to policies followed by key global central banks, i.e. European Central Bank, the Federal Reserve and the Swiss National Bank. Exchange rates were also affected by other global events, such as: Greek political and bank crisis, considerable economic slowdown in China, migration crisis in Europe and further slumps in global oil prices. The year began with a surprising decision of the Swiss National Bank, which declared to no longer protect CHF rate against EUR, hence to discontinue the practice introduces in September 2011, and to reduce the interest rate to -0.75%. Despite earlier efforts of EBC, deflation, which occurred at the end of 2014 deepened in the Eurozone in early 2015. Therefore, a long-awaited program of quantitative easing worth EUR 60 billion, assuming monthly purchases of treasury and private bonds, was launched in March. In line with the EBC plans, the program was to be carried out by the end of September 2016. Still, as the inflation growth in the Eurozone was still low, in December 2015 EBC extended the program period until the end of March 2017 and reduced the deposit rate by 10 b.p. down to – 0.30%. At the same time, the long-heralded increase in interest rates (by 0.25 b.p.) was carried out in the U.S. in December 2015, for the first time since 2006. Moreover, the Federal Reserve informed of its intention to further tighten the monetary policy in 2016. The actions taken by central banks resulted in fluctuations in EUR/USD rates, but, generally, in 2015 the USD remained stronger than EUR and other currencies, including PLN, comparing to 2014. At the end of 2015, USD/PLN rate was PLN 3.92 and the EUR/PLN rate amounted to PLN 4.26, although in April it equaled PLN 3.90. Apart from external factors, EUR/PLN rates were also affected by domestic events, such as presidential and parliamentary elections. The CHF/PLN rate amounted to PLN 3.91 at year end. 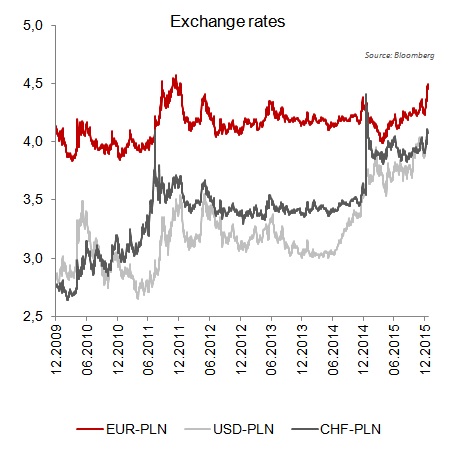 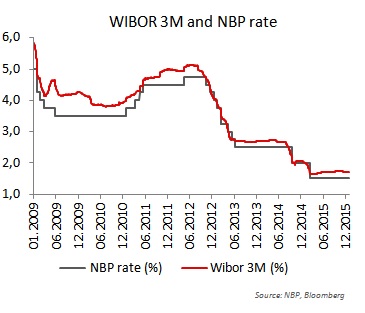