In 2015 the Bank concluded mainly sale and purchase transactions in debt securities, sell-buy-back and buy-sell-back transactions and deposited or borrowed funds in the interbank market as a part of managing short-term liquidity and interest rate risk. Moreover, it entered into derivative transactions such as FRA, IRS or OIS to hedge against interest rate risk. In line with its long-term liquidity management strategy the Bank issued treasury debt securities.

In 2015 the shares item included the fair value of shares in Visa Europe Limited (”Visa Europe”). In December 2015 Visa Europe informed the Bank that the projected settlement amount for the acquisition of Visa Europe by Visa Inc. allocated to the Bank will reach EUR 3,511 thousand, including EUR 2,614 thousand of cash and EUR 897 thousand of preference shares convertible to shares in Visa Inc. The amounts in question may be adjusted by transaction costs and other adjustments resulting from possible appeals filed by members of Visa Europe, which regard adjustments of amounts awarded to members due to transaction settlement. Moreover, deferred earn-out payments to Visa Europe members after 16 quarters of the transaction close have been accounted for in the deal. Earn-out is awarded to members meeting qualification criteria for payments in cash and shares who will not have discontinued their membership in Visa for 4 years of the transaction date. As at 31 December 2015 the deferred earn-out amount allocated to the Bank was not determined.

Based on the information the Bank remeasured shares in Visa Europe to their fair value, with the fair value assumed in the projected amount of cash allocated to the Bank as a result of the transaction settlement and the projected value of shares awarded including a 6% discount, i.e. EUR 3,457 thousand (i.e. PLN 14,733 thousand). 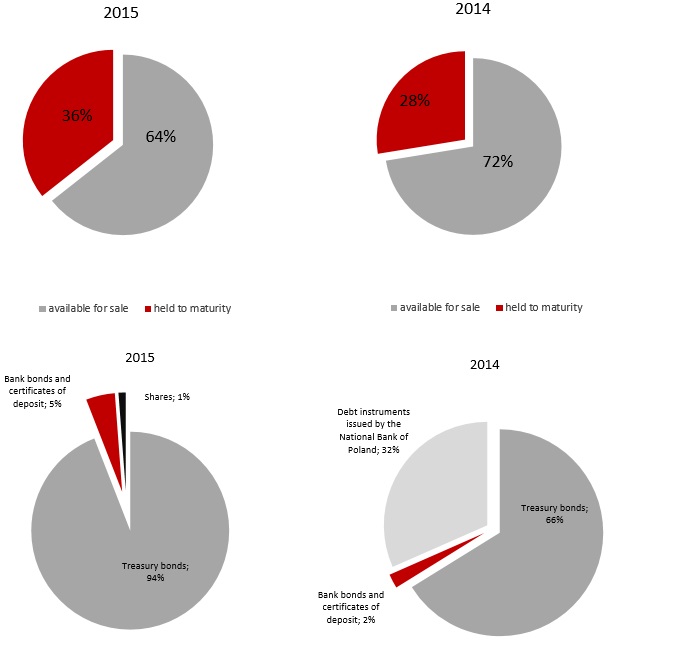 Investments in financial assets available for sale with the total nominal value of PLN 803.3 million constituted 64.4% of the debt securities portfolio and the remaining 35.6% were bonds held to maturity with the total face value of PLN 444.7 million.

In its securities portfolio the Bank also holds debt securities issued by other banks, classified to receivables and loans. In 2015 the value of these securities reached PLN 45.3 million, i.e. PLN 112.9 million less than in December 2014.

In 2015 interest income on investments in financial assets and non-treasury bonds amounted to PLN 40.1 million and was by 26.9% lower than in 2014. The decrease resulted from reduced market interest rates and a lower balance of debt securities.

In 2015 the gain on other financial instruments amounted to PLN 11.7 million, as compared to PLN 1.8 million in 2014. The increase resulted from higher income from sale of debt securities.

Since 2012 the Bank has consistently built the portfolio of long-term equity and liabilities through issues of own debt securities. At the end of December 2015 they amounted to PLN 503.5 million and had a 7.0% share in the balance sheet total. 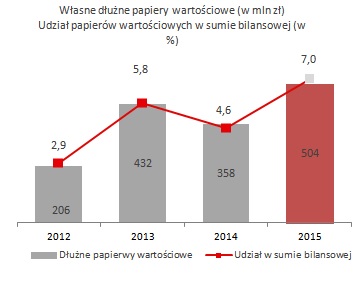 In 2015 the Bank’s commercial transactions were insignificant.