About the Capital Group

General information about the Capital Group

Bank Pocztowy (Bank) is a consumer bank providing safe and simple financial services through the network of Poczta Polska, its own offices operating countrywide and through mobile channels. Its business model is based on strategic partnership with Poczta Polska, which ensures exclusive access to its distribution network and a wide consumer portfolio in provincial Poland.

The mission of the Bank is defined as “simple, safe and well-priced banking”.
For consumers it implies:

Bank Pocztowy focuses on consumer banking and provides a supplementary offer for microenterprises. 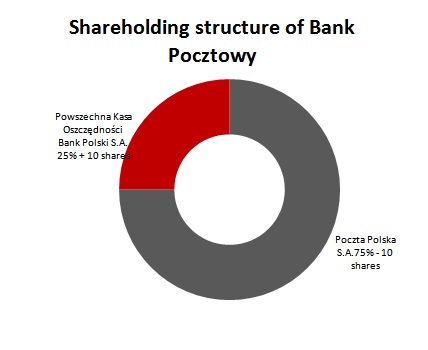 Thanks to the strategic alliance with Poczta Polska, the Bank’s services and products are available in ca. 7.4 thousand outlets and offices (post offices, branches and agencies) countrywide. Apart from Poczta Polska, Bank Pocztowy offers its services and products through 284 own offices, electronic distribution channels (online and telephone banking) and a network of mobile agents of its subsidiary – Spółka Dystrybucyjna Banku Pocztowego Sp. z o.o. Additionally, the Bank’s products are distributed by ca. 23 thousand postmen and other agents. The wide distribution network constitutes a unique competitive advantage of the Bank. 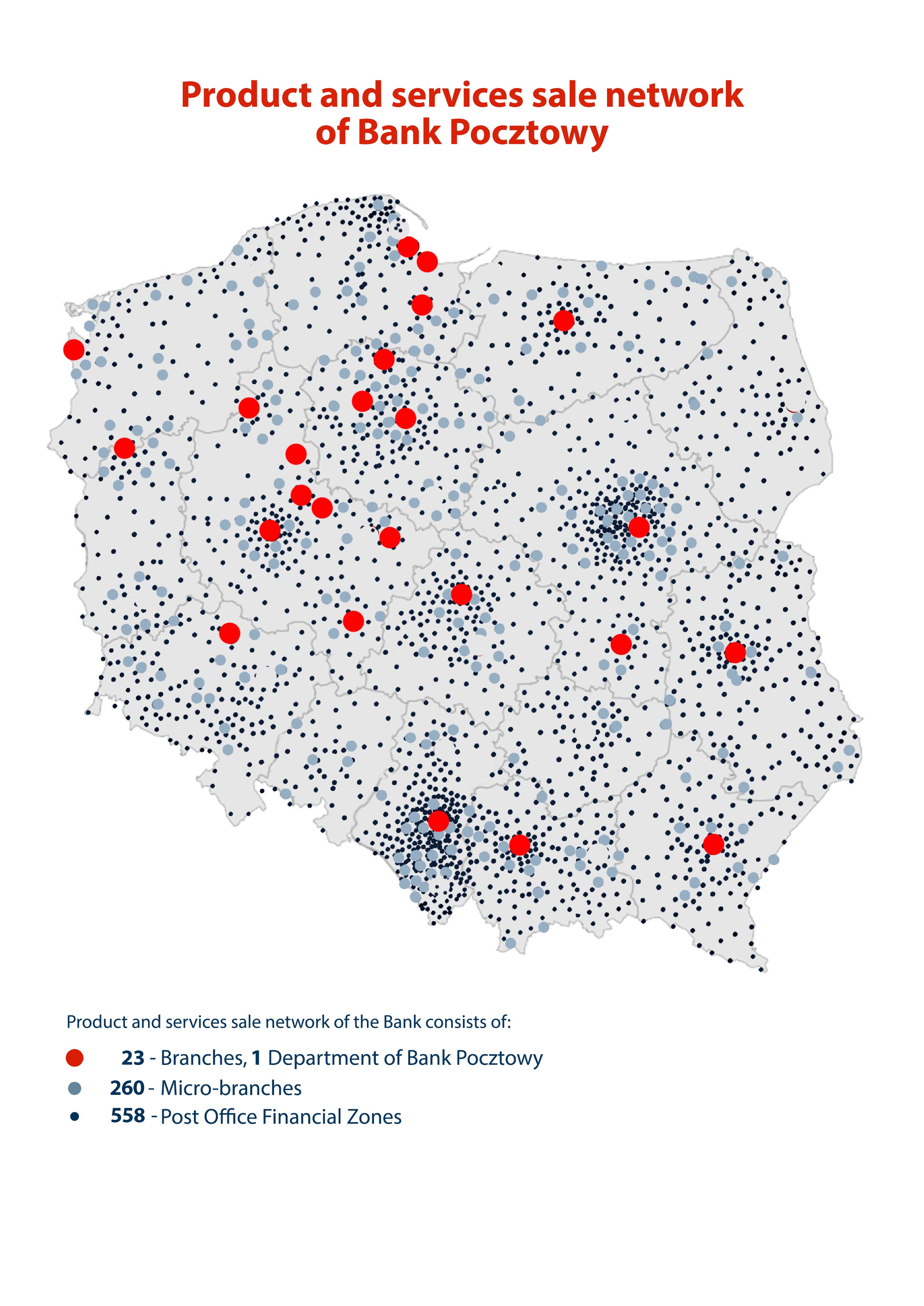 At the end of 2015 the Bank provided services to 1,484.2 thousand consumers and microenterprises. In 2015 it acquired 195.3 thousand new clients in this group. The Bank served over 15.2 thousand of entities in the institutional segment. Consequently, at the end of 2015 the Bank had about 1.5 million clients in consumer and institutional segments.
In 2015 the Group generated the net profit of PLN 33.9 million and ROE of 6.9%.

Number of consumers and microenterprises ( '000) 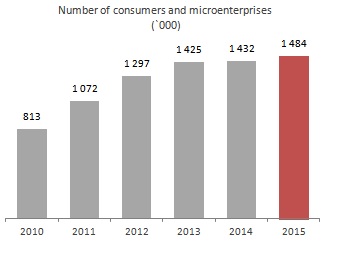 As at 31 December 2015, the balance sheet total of the Group amounted to PLN 7,213.0 million and represented 0.5% of the total assets of the Polish banking sector[1]. The total gross loans and advances granted to clients amounted to PLN 5,542.5 million with 85% of consumer loans. Liabilities to the Bank’s clients amounted to PLN 5 742.4 million, including over 77.4% of funds obtained from the consumer sector. With its 3%[2] share, the Bank has gained a relatively good position in the current accounts market thanks to dynamic growth reported in the last few years and the increase in the number of consumers. 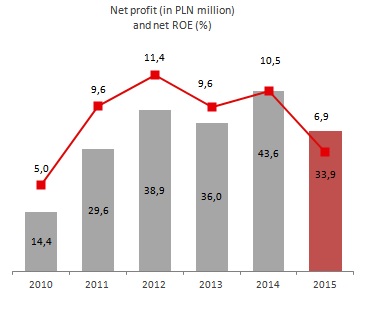 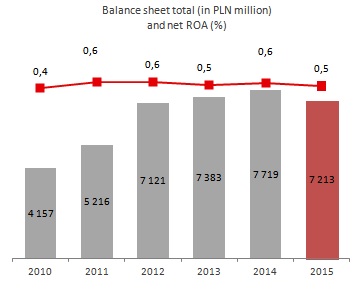 Bank Pocztowy’s bonds have been listed with Catalyst. The Bank’s position as a responsible issuer caring for high standards of communication with the capital market has been confirmed with the award in The Best Annual Report contest for 2014 in the category of Banks and Financial Institutions which was granted to the Bank for the second time in a row. The Bank got the second place and was recognized for the application of the IFRS/IAS in the financial statements.

Subsidiaries of the Bank Pocztowy Group play an important role in implementing the strategy of the Capital Group. They include: 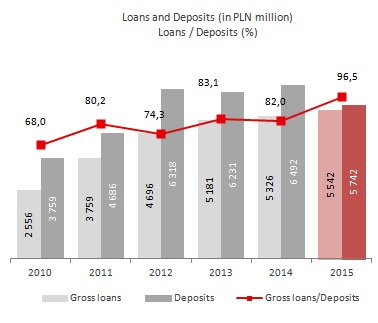 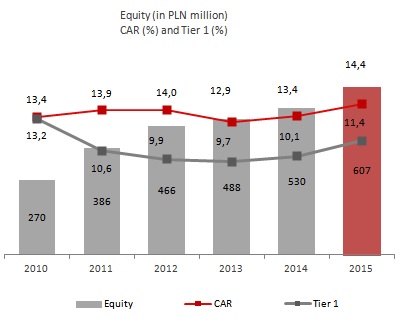 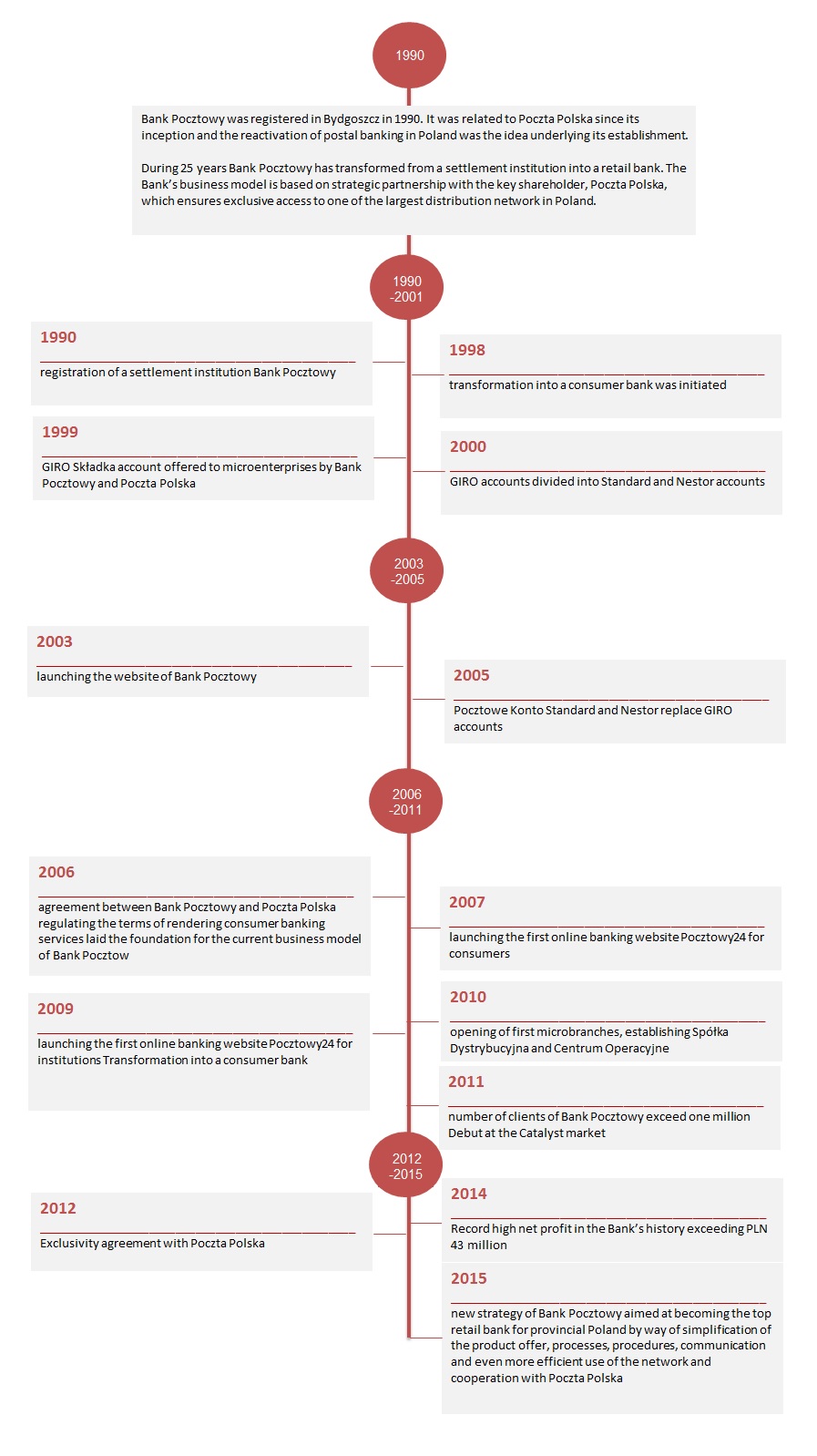 The Group benchmarked against the banking sector and cooperative banks

Bank Pocztowy started operations in 1990. Reactivation of postal banking in Poland was the idea underlying its establishment. To this aim and in order to develop Bank Pocztowy S.A. the GIRO non-cash settlement system was launched to enable fast and easy processing of bulk payments, reduce costs of issuing and circulating cash in the economy and to provide bank services to clients, in particular consumers, through a wide distribution network of Poczta Polska. Therefore, initially the Bank was a typical settlement institution with performance highly related to the volume of settlements with Poczta Polska.

In 1998, transformation into a consumer bank was initiated. The Bank started to reach an increasingly large group of clients through a sales network of Poczta Polska and own branches and sales points. At the same time, it started to launch new products.

Agreement concluded by Bank Pocztowy and Poczta Polska in 2006 regulating the terms of cooperation between the institutions in consumer banking services was a breakthrough event for the Bank's consumer business. Under the agreement over 2 thousand Postal Financial Points were opened in post offices by the end of 2009 to streamline service provision to the Bank’s customers by post office staff. Following the gradual changes and development of the sales network, in February 2010 the number of clients exceeded 500 thousand, in October 2011 it was 1 million, and now it its approaching 1.5 million. Along with the growth in the number of clients, the Bank has consistently improved its profitability, as indicated by a regular increase of its financial profit and ROE.

1.Net interest income, net fee and commission income, gain/loss on financial instruments measured at fair value through profit or loss and realized gain/loss on transactions on securities available for sale.
2.Net loans and advances.
3.Income increased by gain/loss on other revenue and operating expenses.
4.NPL (non-performing loans) – the share of impaired loans and advances in the entire credit portfolio.
5. Interest margin – a relation of net interest income to average assets (calculated as average daily balance of assets)

The Group benchmarked against the banking sector and cooperative banks

In 2015 the Group focused on the offer targeted at consumers, in particular on consumer loans. Following the policy adopted, in 2015 the Group further increased the share of exposures granted to individuals in the total credit portfolio. At the end of 2015 such exposures accounted for 85.0%, i.e. were by 1.9 p.p. higher than the previous year. 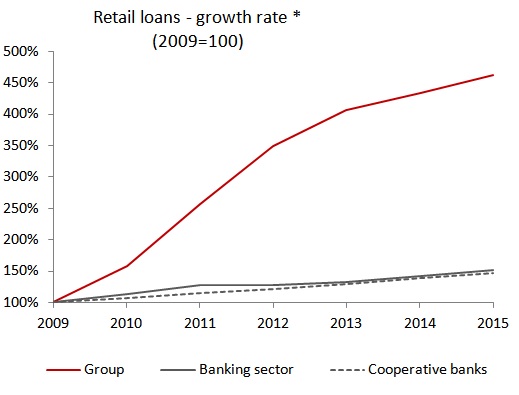 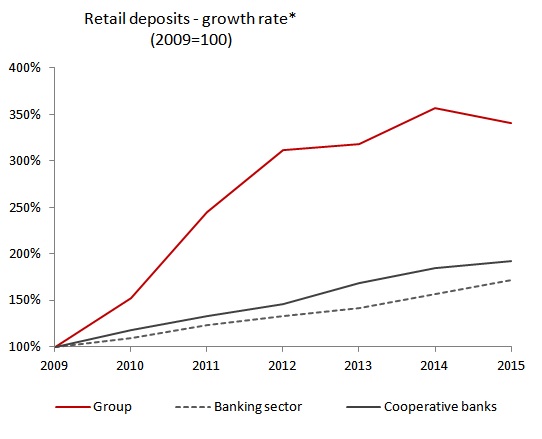 At the end of December 2015 receivables arising from loans granted to individuals amounted to PLN 4 711.4 million and grew by 6.5% p.a., as compared to the 6.7% growth in the banking sector. In 2015, the Group reported a three times higher growth of consumer loans than that of the banking sector.

Due to low market rates, clients were less willing to deposit funds in 2015. At the end of December 2015, total liabilities of the Group to individuals dropped by 4.4% and amounted to PLN 4 444.9 million. 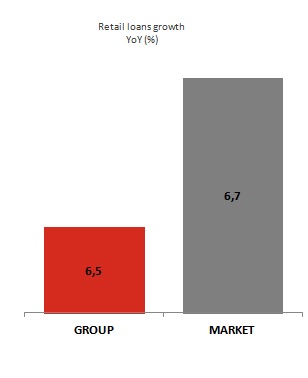 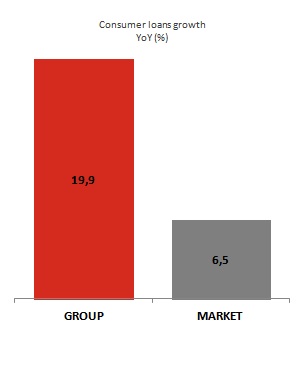 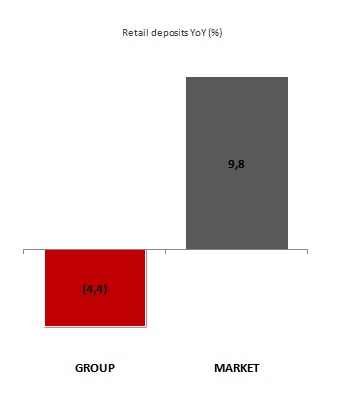 Record low interest rates resulted in a 0.2 p.p. decrease in interest margin in the banking sector and in the Group. Significantly, the Group’s margin was considerably higher than in the entire banking sector.

A series of one-off events resulting in considerable financial charges affected the profit of the Group and of the entire banking sector: increasing the additional payment to the Bank Guarantee Fund related to the bankruptcy of Spółdzielczy Bank Rzemiosła i Rolnictwa seated in Wołomin („SK Bank”) up to PLN 2 billion and the cost of payments made to the Borrowers Support Fund established under the Act on supporting borrowers in a difficult financial situation who have been granted a mortgage loan of 9 October 2015 of PLN 600 million. 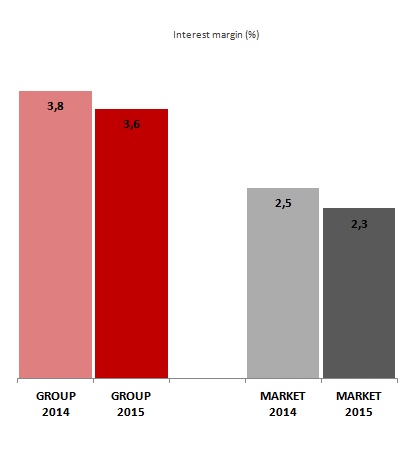 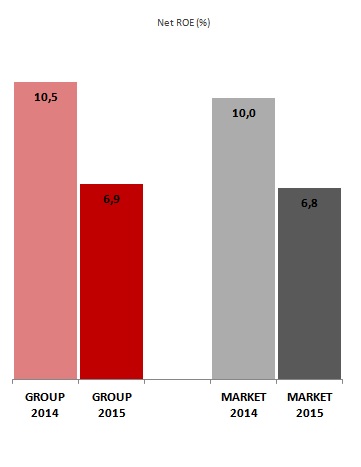