Activities in the consumer market

At the end of 2015, services offered by Bank Pocztowy were used by 1,484.2 thousand consumers (individual and microenterprises), i.e. 51.9 thousand more than a year before.

The growing number of consumers confirms that the Bank's decision to create a simple and transparent offer built around trust and security has been appropriate. As a result, in 2015 the Bank acquired over 195 thousand new consumers.

Development of the product offer for consumers

Bank Pocztowy has created a simple and comprehensible offer for consumers, including deposit, credit, investment, and insurance products. Following the strategy to simplify the offer, in the first half of 2015 the number of products and their variants has been limited.

A current account for consumers is the key product used for acquiring consumers and the focal point in customer relationships.

On 1 April 2015 the Bank withdrew Pocztowe Konto Nestor targeted at senior consumers from its offer at the same time maintaining such accounts opened before that date. At the end of December 2015 the Bank managed 290 thousand active Nestor accounts, which constituted 32% of current accounts.

To drive acquisitions and transactional activities, in August 2015 the Bank launched a promotional action Opłaca się opłacać available to holders of ZawszeDarmowe accounts targeted at clients making payments to accounts. The promotion assumes that consumers will receive a PLN 100 bonus, i.e. get a portion of bills paid back from the Bank. The bonus is paid in the period of 5 months and is calculated as 10% of the amount of bills paid not to exceed PLN 20 per month.

Moreover, Bank Pocztowy has launched loyalty schemes and transactional activity programs to encourage its clients to actively use their personal accounts:

Responding to clients’ needs, the Bank has extended its lending offer with:

At the same time, the Bank communicated a message to clients focusing on the loan and installment amounts. It also introduced changes with respect to insurance constituting loan collateral, its scope, the sum insured and the method of calculating and collecting premiums. At the same time, the loan amount for which collateral is required has been changed. A new, semi-automatic processing path has been introduced. All these changes have been implemented along with a new cash loan credit approval process in the FerrytFlow application.

In April 2015 the term deposit offer was simplified by way of eliminating a number of product types and variants. In order to encourage clients to hold a personal account and to use remote banking services the Bank has increased interest rates on deposits made in the current account via the Internet or the Contact Center by 20 b.p.

The process of opening a current account was optimized in November 2015. The number of process steps has been limited, the workload for Relationship Managers has been reduced hence improving efficiency of customer service. Following the changes made an account may be opened within 15 minutes.

Since January 2015 the Bank, in cooperation with Ipopema TFI, has offered the possibility to purchase units in selected investment funds with a various investment strategy and risk profile. The funds’ offer constitutes and interesting alternative to the deposit offer for clients with a higher risk appetite. Investment products are available in the Bank’s sales network only.

At the beginning of 2015 numerous regulatory changes were implemented, hence the Bank had to adjust its insurance operations to the requirements determined by the Polish Financial Supervision Authority in Recommendation U. Due to regulatory changes the Bank had to carry out a business assessment of insurance products with particularly low insurance premiums. Consequently, it was necessary to eliminate credit card and debit card insurance and accident insurance to overdrafts from the Bank's offer.

An important process change was also introduced in 2015, which included the change in the method of calculating and collecting insurance premiums from clients. The insurance premium is no longer calculated and charged on a one-off basis, but it is payable monthly. The change proved very important for clients, as it enabled prorating the cost of insurance over a period of time.

Source: management information of the Bank. The data present the principal amount only. Default interest, due and undue interest, commissions, other prepaid expenses and revenue, other restricted revenue and interest and other receivables were not included. Consumer loans includes cash and installment loans, overdrafts and credit card debt and the principal amount balance of loans granted to microenterprises which amounted to PLN 39 308 thousand as at 31 December 2015, as compared to PLN 43 933 thousand as at 31 December 2014. The item does not include the balance of mortgaged loans for consumption purposes, which were presented in mortgage loans.

Mortgage loans remain a large portion of the portfolio. As at 31 December 2015, the Bank’s receivables due to mortgage loans reached PLN 2,625.1 million and were by 2.4% lower than in December 2014. In 2015 the Bank, offering local currency loans only, extended PLN 106.2 million of mortgage loans, i.e. by 48.1% less than in 2014, when the sales reached PLN 204.6 million. The decrease resulted from the strategy followed. Due to limited capital, the Bank focuses on the sale of products with the highest profitability considering their effect on the capital, which implies promoting the sale of consumer loans. 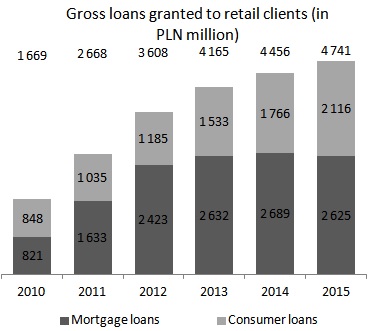 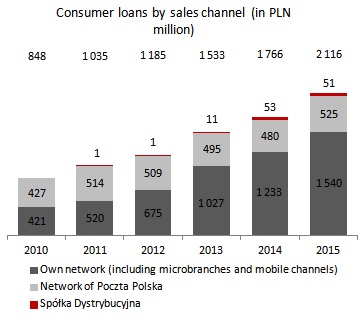 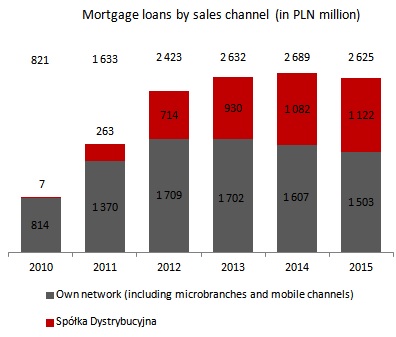 In the years 2013-2015 cross-selling activities, i.e. the sale of products to the existing client portfolio under the approved limits, grew dynamically. The strategy was aimed at increasing the volume of loans granted to clients, and consequently growing their profitability. This was achieved through:

In 2015 the Bank adjusted the speed of developing its deposit base to credit needs, including optimization of the funding costs. At the end of December 2015 consumers deposited in the Bank the total of PLN 4,523.5 million versus PLN 4,656.2 million at the end of December 2014 (a decrease by PLN 132.7 million). Consequently, the Bank's share in consumer's deposits market8 reached 0.7%.

Source: management information of the Bank. The data include only the principal balance of deposits of individuals and microenterprises, without accrued interest. As at 31 December 2015 the balance of deposits of microenterprises amounted to PLN 116 649 thousand, while as at 31 December 2014 it was PLN 91 100 thousand. Interest accrued were not included.

At the end of 2015 Bank Pocztowy managed more than 1 million active current accounts of consumers: 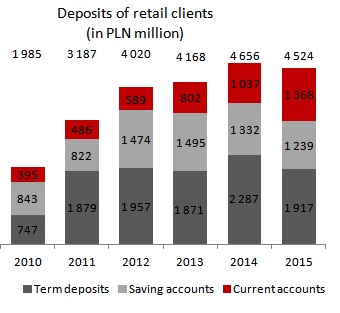 In December 2015 consumers deposited PLN 1 239.0 million on saving accounts in the Bank, i.e. by 93.6 million less than at the end of 2014. The decrease resulted from the deposit structure change aimed at reducing the costs of the deposit portfolio.

Due to decreasing interest rates the lowest demand was reported for term deposits. At the end of December 2015 funds placed in term deposits amounted to PLN 1 916.8 million and were PLN 370.0 million lower than at the end of 2014.

In December 2015, 66.1% of funds deposited with Bank Pocztowy came from consumers and were collected through the Poczta Polska network: 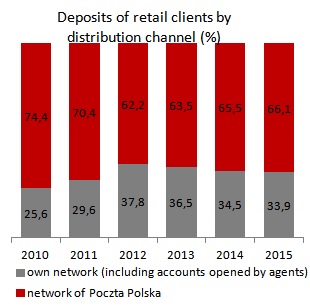 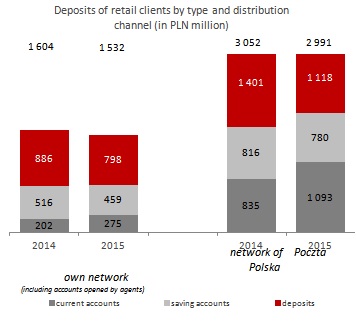 In 2015 the Bank sold investment fund units with the value of PLN 206 million, which implies a high demand for such products among the Bank’s clients.

Works are carried out to introduce investment fund units to the Bank' s offer to be sold as white label products - Pocztowy Specjalistyczny Fundusz Inwestycyjny Otwarty. A necessary request was filed with the Polish Financial Supervision Authority by Ipopema TFI. The products of Pocztowy SFIO are expected to be offered starting from Q2,2016.

In Q1,2015 the Bank withdrew a structured product Światowi Giganci and a unit-linked insurance product Złote Jutro from its offer intending to simplify its investment offer and to focus on the sale of investment fund units.

At the end of 2015 the payment card portfolio for consumers amounted to PLN 257 thousand, out of which 93% were debit cards.

Major changes in the payment card offer of the Bank: 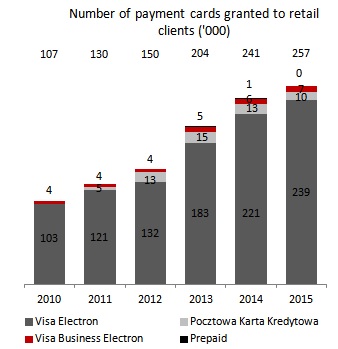