Situation in the banking sector

Deposits of households and enterprises

At the end of 2015 the total deposits in the banking system amounted to PLN 996 billion, i.e. by 8.9% more than at the end of 2014. Deposits of households stood at PLN 646.0 billion. In 2015 the growth rate of deposits of households gradually increased and in December reached 9.2% year-on-year (versus 8.8% in December 2014). The deposit growth being higher than in the prior year resulted mostly from an improvement on the labor market, while the interest rate reduction introduced by National Bank of Poland in March adversely affected the attractiveness of investments in the banking sector. Another deposit driver was deflation reported during the entire year. In December 2015, deposits of enterprises amounted to PLN 249.4 billion, i.e. increased by 10.4% during the year vs. a 9.4% increase in December 2014. A higher growth rate of corporate deposits resulted from improved financial condition of businesses. Historic low costs of credit encouraged enterprises to take out loans for financing growth and investment.

Dynamics of deposits (year to year) 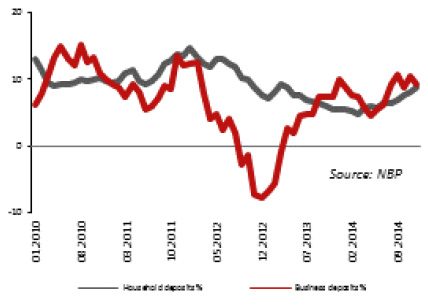 Loans and advances to households and enterprises

In December 2015, loan receivables in the banking sector totaled PLN 1 076.4 billion, being 7.0% higher than in December 2014. In 2015 loans and advanced to households went up by 6.6% up to PLN 632.6 billion. Housing loans in the local currency grew from PLN 190.4 billion in December 2014 to PLN 212 billion at the end of 2015 (by 11.3%). Record low interest rates and an improvement on the labor market positively affected the scale of the new lending campaign. In the second half of 2015, apartments bought on the secondary market were included into the Flat for the Young program, which considerably increased credit appetite of consumers. On the other hand, the down payment was increased from 5% to 10% on 1 January 2015 in accordance with the Recommendation S issued in 2014, which adversely affected the appetite for debt. In December 2015 the portfolio value of foreign currency loans increased to PLN 166.2 billion, i.e. by PLN 3.1 billion since the end of 2014. The increase in the portfolio value resulted in particular from weakening PLN versus CHF and other currencies. More restrictive provisions of the Recommendation S have made taking out foreign currency loans very difficult. Receivables of the banking sector due to consumer loans from individuals increased. In December 2015 they totaled PLN 126.4 billion (versus PLN 118.4 billion in December 2014). The consumer loan volume increase resulted from a reduction in interest rates and more lenient loan terms offered by banks, among others in relation to the observed labor market improvement. In December 2015 the value of loans granted to enterprises was PLN 326.0 billion versus PLN 300.9 billion in December 2014 (8.3% growth). More new loans in the corporate sector resulted from increased investments made by businesses. Moreover, corporations were encouraged to apply for loans due to attractive interest rates offered after the reduction introduced in March by the Monetary Policy Council and the Council's announcement that the rates would not be reduced any further in the following months.

Growth in loans (year to year) 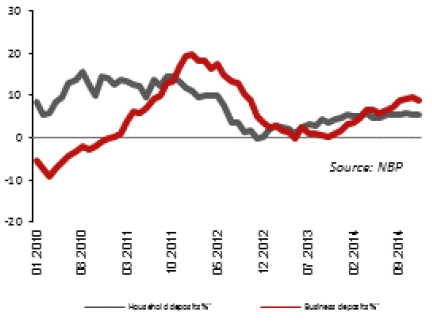 Interest rate on deposits and loans

Financial performance of the banking sector

The situation of the Polish banking sector deteriorated in 2015, comparing to the previous year. In 12 months of 2015 banks generated the net profit of PLN 11.5 billion, i.e. 27.6% lower than in December 2014. Banking sector performance was affected by:

Gross profit from continuing operations in 2015 (in PLN) 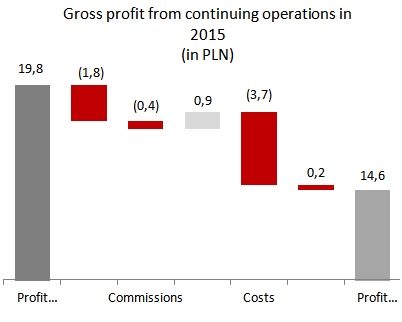 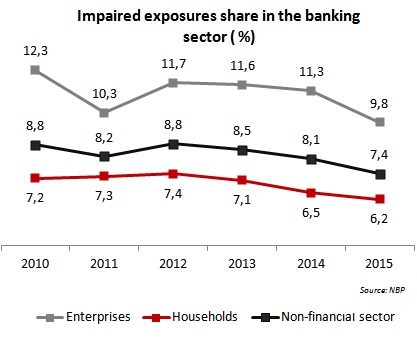